Each of the seven columns of this fingering chart is an overtone series.  Overtones are also called harmonics or partials, but brass players also call them slots.  The intervals between these slots (labled at the left) are the predictable and consistent phenomena of acoustics in nature…no matter what the instrument, what it’s made out of, and how long or short it is.  At the lower end of the series, the size of each interval is unique…one perfect 5th, one perfect 4th, and one major third.  Ascending farther up there are two consecutive minor 3rds, but still, this is the only place in the series with this intervallic structure.  The high A#-Bb in the overtone series with this valve combination (open) is an alternate fingering…in fact that entire slot for every valve combination across the board is an alternate fingering.  It is also the first slot that is not in the major key of the root key (in this case C major), and many less experienced players do not even know of its existence.  Climbing even higher, there are three consecutive major 2nds, which often make it even harder for the player to orient himself within the series when playing, especially when it takes longer to master control in that register.  The next slot up (F#-Gb in this series) is even trickier, for variables like the embouchure formation, airstream and mouthpiece can affect the intonation to the degree that it actually sounds one 1/2 step lower.  Before there were valved trumpets, this range of the horn (with consecutive 2nds) is where a composer could write scale like parts for the instrument.

So as the overtone series goes higher, the intervals between the harmonics-partials-slots become smaller.  Since each of the seven valve combinations have the same number and spacing of slots, there will be more and more overlap… where the chromatically descending notes in the slot’s seven positions spill over into into the range occupied by the next slot lower.  This creates a duplication of pitches with different fingerings.  These alternate fingerings rarely are in tune, unless there is a deficiency in the player’s fundamentals, the horn or the mouthpiece.

You can continue to descend chromatically even farther, but at this point the notes will be induced…forced to play, since they do not naturally occur on the instrument.  In fact, between the lowest F#-Gb on the fingering chart and the pedal C are another group of induced notes.  Since the interval in all seven positions between the fundamental harmonic and the second harmonic/1st overtone is one octave (i.e. low C and pedal C ), even the longest combination of valves (1, 2 & 3) will not allow for the continued, chromatically descending scale in the way the shorter spacing between the upper harmonics will allow.  Four valve piccolo trumpets (whose entire harmonic series is an octave higher) and four valve flugelhorns can seamlessly (and without overlap) make the complete chromatic connection between the fundamental harmonic slot and the first overtone slot because their fourth valve (the equivalent length of the 1st and 3rd valves combined) adds even more total length (and possible valve combinations) to the instrument.

There are opposing views on the value of practicing pedal tones.  Those in favor say that the upper register and airflow will improve with a regimen of pedal tones, and that they are great for getting the blood circulating in the lips…while those opposed say that the playing formation will be compromised too much to affect positive changes in range and endurance, and that they are just a waste of time.  My opinion lies somewhere in between…I can see strong benefits, but only if the pedal tones are played with the strict form and singular position described in other posts in this blog.  At some point I’ll devote a post to pedal tones. 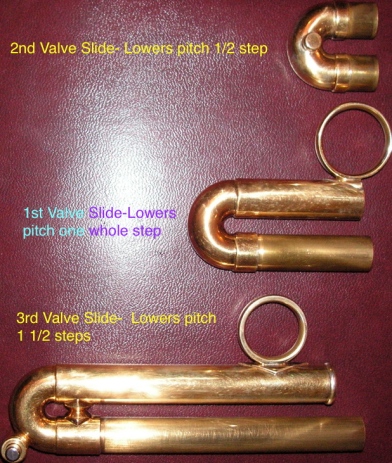 The seven positions of the trumpet are like the seven slide positions of the trombone, except instead of using a single slide to change the length of the instrument, the trumpet’s valves are used to add or subtract specific, precut slide lengths, that when combined in different combinations, can achieve the same seven positions.  The picture on the right shows the three valve slides pulled from the trumpet in order to more clearly show their relative sizes to one another.  The second valve slide is the shortest, and lowers the pitch 1/2 step.  The first valve slide is twice as long, and therefore lowers the pitch twice as much (one whole step).  The third valve slide is as long as the first two slides combined, therefore lowering the pitch 1  1/2 steps.  The chart below shows the simple math behind the sequence of fingerings that gradually lower the pitch of the horn in half step increments.

During the history of the development of trumpet design, builders experimented with more than three valves.  One advantage of the six valve trumpet seen on the right was better intonation, for after the open position, each of the six remaining chromatically descending positions has its own dedicated valve slide (instead of having to combine the valves in different ways to get the required number of specific horn lengths). This particular instrument was designed by Adolphe Sax, the inventor of the saxophone. However, besides having a different and more challenging fingering system, the added weight of this horn was also an issue.  The modern trumpet sticks with three valves, which although it is lighter and easier to operate, makes compromises with the intonation. The 1 & 3, and 1 , 2 & 3 combinations are sharp (the 1, 2 & 3 combination even more so), which means the third valve slide needs to be lengthened, by extending the ring finger in the slide’s ring (seen in the photo above with the three valve slides).  Depending on the musical context, sometimes the first valve slide must be used for the job (see the Example A below).  The three valve design is a compromise, but over time has proven to be the most useful and practical alternative.

It is important to be well versed with the trumpet’s alternate fingerings, even if they are not used frequently in more traditional contexts.  These fingerings do offer a solution to awkward fingerings that must executed at high speeds, like when performing certain trills.  Example A shown below, would best be played with the 1st, rather than the 3rd valve slide out to correct the pitch of the normally sharp sounding low D.  If the 3rd valve slide was used for that purpose it would also lower the pitch of the E even more (remember the 3rd valve slide alone sounds flat in comparison to the 1 & 2 combination). Example B would need the 3rd valve slide out to correct the pitch of both notes. Although the 1 & 3 fingering does not need as much correction as 1, 2 & 3, the intonation of the A# deserves priority since the ear hears it first, and because it is the fundamental note of the trill.  For both examples, listen carefully to the intonation and make the corrections with the slide(s) accordingly.  The alternate fingerings can eliminate the need to coordinate the valve motion of the traditional fingerings (with one valve going up while another goes down), making it much easier to not only go faster, but to also achieve a greater clarity.

Practicing slur patterns on the seven overtone series is a great way of coordinating the entire trumpet playing system, for by staying with one series at a time (and therefore one consistent fingering-combination of valves) it is easier to concentrate on the coordination and balance of the airstream and embouchure through the range of the instrument.  Some would include the action of the tongue in this playing system as well, but either way, eliminating valve changes during the slur allows one to concentrate on more fundamental elements.  Example E above, shows a two note slur that gradually moves higher in the series, while Example F shows a longer slur that gradually progresses lower by repeating the same slur pattern with the next lower valve-slide position.

If you had to play something like Example G, practicing examples H and I would give you a couple of ways to check your fundamentals, for they both approach the high G without a valve change.  There is also no tempo or rhythm shown, so it is easier to base that final segment of the slur on a gradually accelerating airstream and a matching resistance at the embouchure…letting the slot change only when dictated by all of the correct fundamentals, rather than by excessive mouthpiece pressure, tight throat, squeezing, etc..   Example I’s smaller interval could reveal this tension/squeezing even more since the slots are even closer together (remember there is an A just above that G that can also be played with the slur’s alternate fingering 1 & 3)…sometimes players squeeze right over the F or the G.

Always balance your slur practice, making sure one register isn’t favored over another.  If you are approaching the lower register correctly, then the upper range will also improve…so be sure to test it by then playing some form of an ascending slur.  Also, if you are practicing to extend your upper register by using a slur, then alternate with a descending slur and compare the two…the objective being to find the relaxed, efficient, singular way of playing in both registers.  Overtone series slurs deserve more space than allocated here, but this discussion should give you a start on some important points and approaches to consider.

Since each of the trumpet’s seven overtone series has the same intervalic structure, the ear should learn to recognize the key center of the series and the slur, and the function of every note in that key…the  root (1), 3rd, 5th, b7th, etc. (labeled in red in the tall, skinny graphic above, and in the last graphic below).

For a printable PDF file of the Seven Overtone Series seen below, click here: 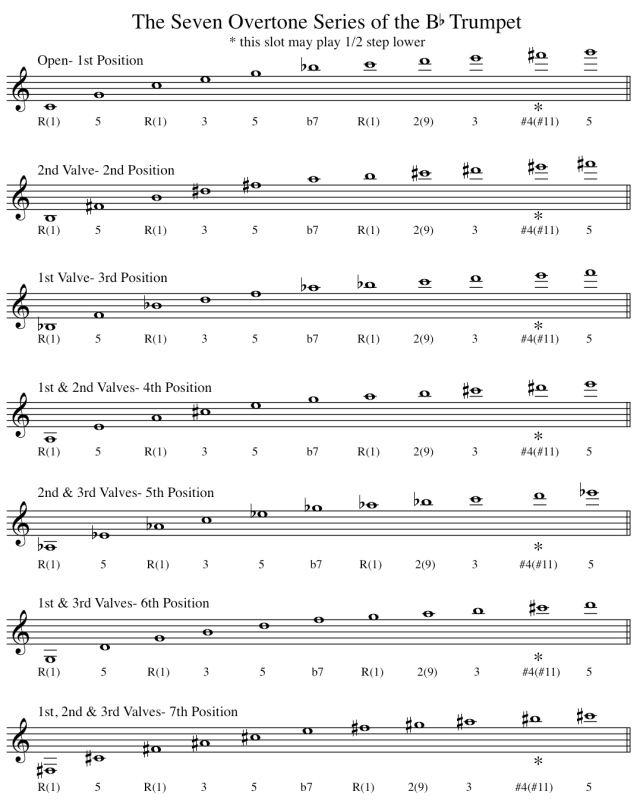